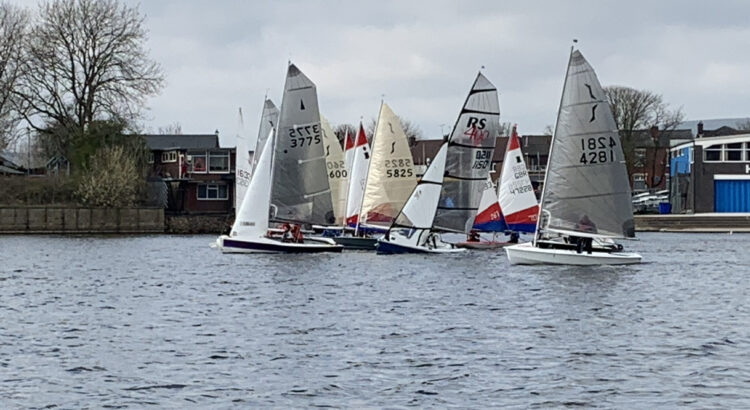 A light westerly wind resulted in some close racing this evening. The Solos of Martin Brennan and Mike Smith took full advantage of the conditions to sail well and secure a 1-2 with the GP14 of Adam McGovern and Eleanor Davies coming home in 3rd. We had some tight battles throughout the fleet with Evan Parry just getting the better of Tom Daniel in the lasers and the GP14 of Nick Hornsby and Rod Daniel had a great race with the other Solos with Kevin Parry winning that battle.

It’s great to be back! A big thanks to the duty team once again.

Following on from a tough year and a Winter Lockdown that really tested the mental strength it was with great joy that we were finally able to get back on the water.

With the easing of restrictions a week ago, sailors were keen to get racing on the Lake again. Some had been on water during the past week. However, it was great to see 15 boats out on Sunday.

In the breezy conditions, it was always likely that the five Solos would have the closest racing in the results. However, the range of boats would also see who was in the fittest trim to race. And there would be several capsizes as the day became more blustery with the clouds building. Some sudden windshifts would catch the unwary.

In the first race, Chris Massey (having been out on Saturday with his young daughter in a Mirror) was race ready to win in his RS300. It was the Juniors in Toppers who showed up well, with Hector Droungas in second place, ahead of Nick Brook (Solo), having got past Andy Carter. Fourth place went to Jacob Din (Topper). Although Nick Brook and Daisy Fisher were tied on two race results, the last race success gave the day to young Daisy.

Other points of note:

Mike Smith was the unfortunate winner of the first capsize, but several others had a swim as well, notably Evan Parry who death-rolled his laser immediately infront of Nick Brook, who barely managed to avoid serious contact.

Adam McGovern was proving how good Betsy is at rigging, by failing to get the boat rigged correctly without her help! Richard Marsh said that in the second race, on the reach from E to B that as they approached Cafe Point in a massive gust that it went very quiet in the boat as they approached the point at high speed! Fortunately they managed to clear the point in their new (to them) RS400.

It was a testing day, in terms of the wind that came through off the club shore, but the dinghy park was filled with happy sailors at the end of the day.